This nearly 100-million-year-old wing tip features bones, soft tissue, and feathers preserved in amber. It was nicknamed “Angel” because it was originally intended to be used in a pendant called “Angel’s Wings.”

>>>The two new samples, weighing in at only 0.06 and 0.3 ounces (1.6 and 8.51 grams), contain bone structure, tracts of feathers, and soft tissue. They are the first Cretaceous plumage samples to be studied that are not simply isolated feathers, according to study co-author Lida Xing of the China University of Geosciences.<< 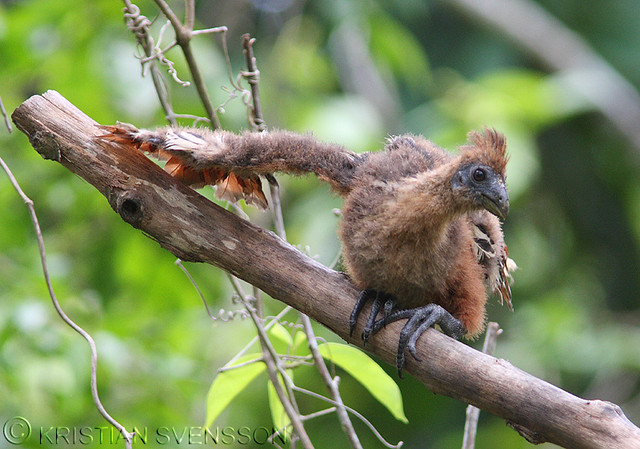 Newly described bird wings—not just a single feather or a strange-looking fiber or two—rose to the top of a long list of spectacular amber-trapped fossils. Two tiny hatchlings may have seen dinosaurs just before their wings got trapped in fast-flowing tree resin. At least four waves of the magic evolutionary wand would be needed to shove these unique fossils into deep time.

Locals mined and prepared these ambers from the Angbamo site in Kachin Province of Myanmar (formerly Burma) for jewelry. Lead author of the Nature Communications report Lida Xing led a team who recovered the amber wings from a popular market in Myitkyina, the capital of Kachin. A jewelry designer had been making the wing-containing gems into a pendant called “Angel’s Wings” before the team acquired them.2

Researchers tentatively identified the amber wing fossils as belonging to a group of extinct but fully formed birds called enantiornitheans. These powered flyers also had claws on their wings, like juvenile hoatzin from today’s Amazonian swamps.

The Burmese amber is still clear enough to reveal minute details, including the baby feathers’ interlocking barbs and barbules. Ambers darken over time as they react with oxygen. After 100 million years, shouldn’t they all be completely dark, with no feathers or insects visible beneath the polished ancient amber’s opaque surface?3 It’s as though someone waved a magic wand over the amber to keep normal chemistry from happening.

Long-age thinkers often believe that amber hardens only after long time spans, but like other amber fossils, these “Angel’s Wings” show clear evidence of rapid entombment. The study authors wrote,

Bi-directional claw marks within the amber flow lines, along with the abundance of decay products in the surrounding resin and the saponified [soapy] appearance of exposed tissue in the apterium, suggest that this specimen may have been at least partially engulfed in resin while still alive, and that much of its decay took place under anaerobic conditions.1

In other words, one of the little birdies was clawing around, struggling to survive and waving its wings inside the sticky resin. But too much resin flowed too fast for the fledgling to escape. Tiny claw scrapes in one of the two bird wing fossils, as well as varnish familiar to carpenters, show how fast tree resins harden.4

The two wing fossils preserve hardening lines, where pulses of resin flowed in big blobs and quickly formed an outer crust. Other pulses soon followed, each with its hardening line. Only severely damaged trees emit so much resin in such lump sums. Diggers have been extracting Burmese amber from deposits like Angbamo for decades. What caused all this resin to rapidly pour forth? Did the same catastrophic force that rent so many trees apart also transport these ambers and bury them in sediments?

One would have to wave the magic wand yet again to cover the biodegradation problem these specimens present. Amber develops cracks as it hardens and dries. Cracks expose the interior to microbes. Some fungi even consume the chemicals that comprise amber itself.5 After 100 million years, shouldn’t microbes have consumed these rich organic sources many times over, leaving no specimen to study?

Last, even if amber miraculously withstood the ravages of darkening, cracking, erosion, and consumption by microbes, bird-wing tissues turn to mush and dust according to the universal law of entropy. The mummified skin and bone sections of these tiny wings decayed only partially, leaving whitish bubbles containing tissue byproducts in the amber. The study authors wrote, “Details of the ventral wing surface are partially hidden by decay products and inclusions in the amber.”1 After 100 million years, shouldn’t these wings have completely decayed? The feathers, bones, and skin should no longer exist in such recognizable forms if the wing is really millions of years old.

These two amber gems preserve evidence of ancient bird life and clearly indicate that those small birds struggled through their last wing flaps in the not-too-distant past—several thousand years ago.

*Mr. Thomas is Science Writer at the Institute for Creation Research.

Instead of seeing the obvious ( that this find is thousands not millions of years old ) the EV OE bias is taken for fact right off the bat.